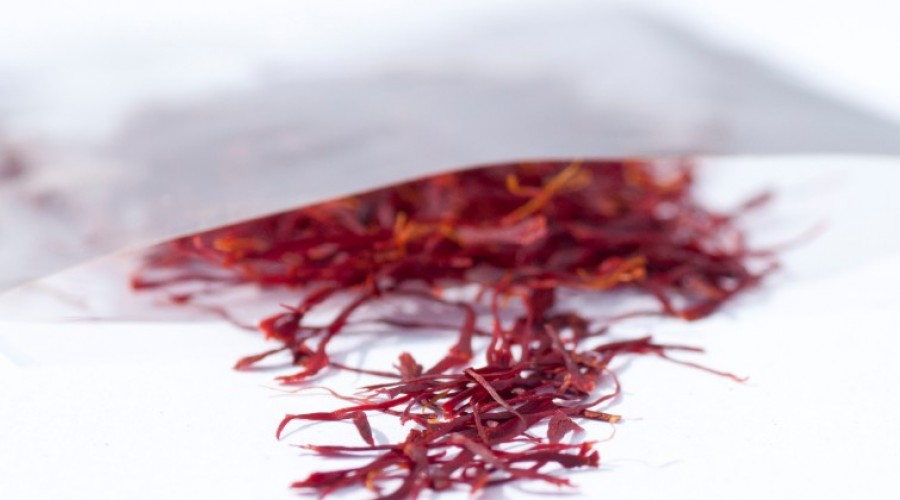 The story of the miracle spice over the last 4000 years.  Crocus sativus as the engine of an econom.

Part 1  The birth of the Saffron trade in the Meditteranean

The history of Saffron goes back many thousands of years. In caves in what is now Iraq archeologists discovered that cave dwellers have used the powerful orange colour of the Saffron stigma as component of their paint.

The first images of Crocus sativus Saffron flowers we know of have been found on earthenware pots in Minoan palaces. The oldest, well-known image can be seen on a pot that was made around 2000 – 1800 BC, so 3800 to 4000 years ago.

Frescoes in the Minoan palaces of Knossos on the island of Crete and Akrotiri on the island of Santorini North of Crete date from around 1650 BC. We see a goddess who is offered a sacrifice of the new harvest. Several women are harvesting Saffron on other mural paintings. Another woman uses Saffron to color her lips, possibly in preparation for a religious ritual. 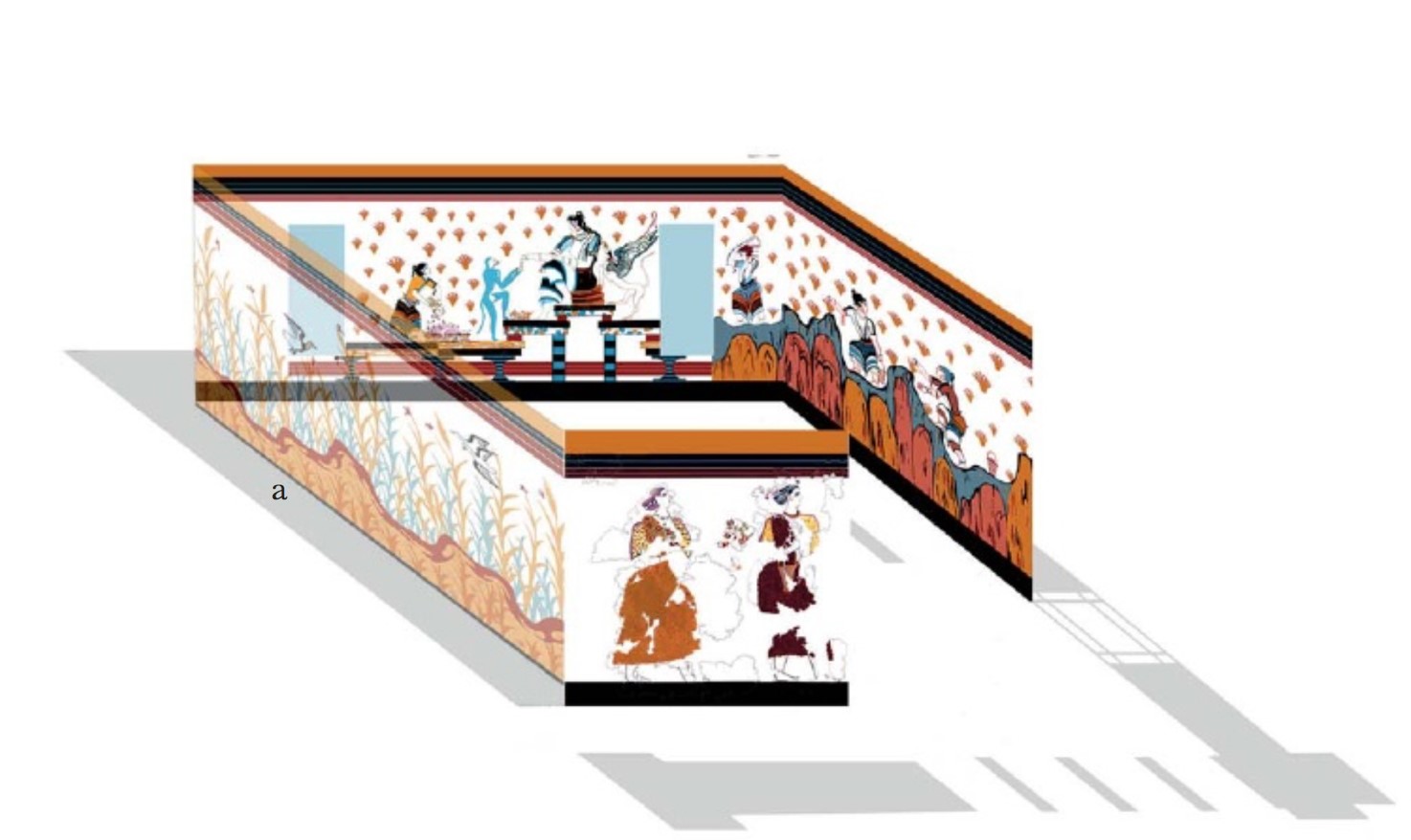 A reconstruction drawing of a room in the complex of Akrotiri, where several walls had frescoes with Saffron flowers and plants on them, as shown in the following pictures.

The goddess in this scene oversees the harvesting of the Saffron. This fresco makes clear how important Saffron was to the Minoan civilization. 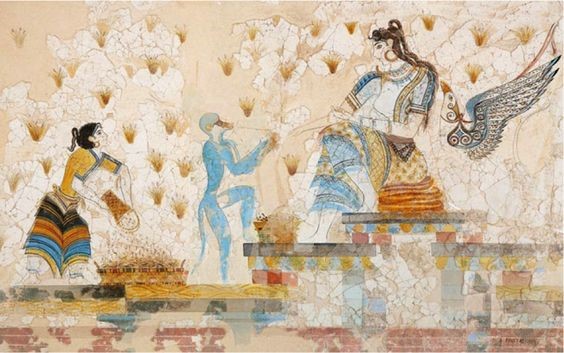 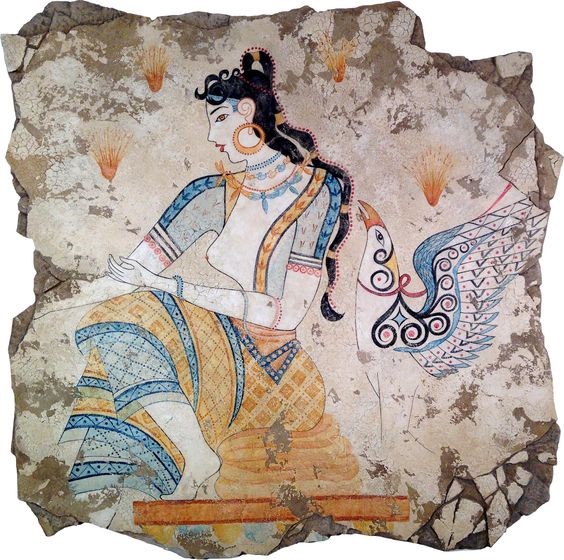 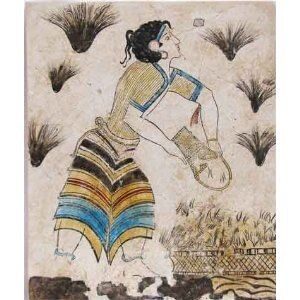 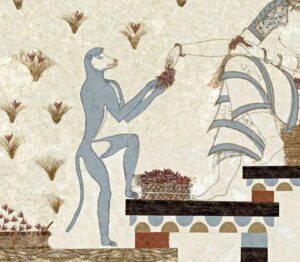 The following scene, called “The Saffron Harvesters”, once again demonstrates the importance of Saffron on the island of Santorini to the north of Crete. 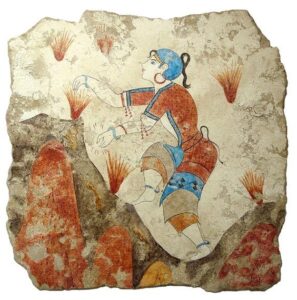 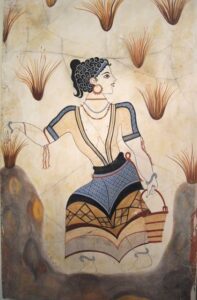 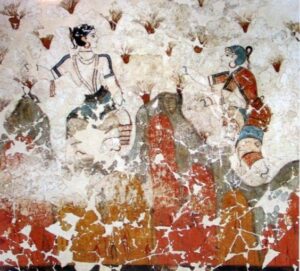 It is assumed that it is the same goddess, in this scene sitting on a rock, who is injured at her foot. Her blood runs into the Crocus flower and makes the stigma red. There might be links here with other Greek mythological stories about the origin of the Crocus sativus. 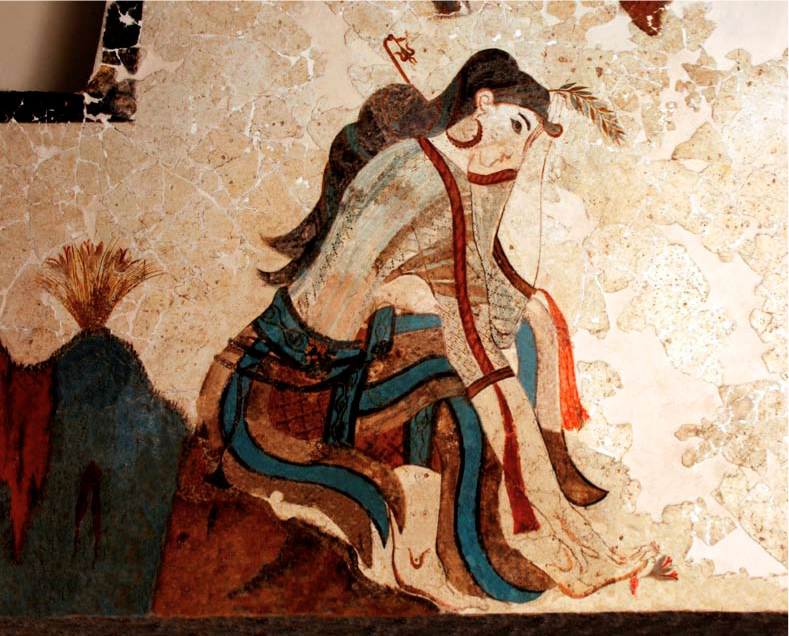 IThe following scene, called “The Saffron Harvesters”, once again demonstrates the importance of Saffron on the island of Santorini to the north of Crete.

In this scene, a priestess (or maybe an “ordinary woman”) holds a bowl of Saffron in front of her. The lips are coloured with Saffron, as are the ears. 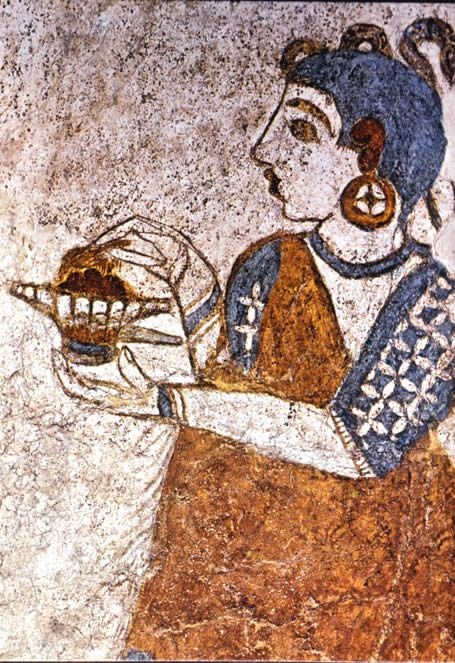 Excavations in the entire area around the Mediterranean show that Saffron – along with tin – was the main trade product of the Minoan civilization. The wealth of the inhabitants of Crete and surrounding islands was therefore based for a considerable part on Saffron.

Around this a religion seems to have been developed, in which Saffron plays a central role. The religious expressions show affinity with religious rituals that were performed in Egypt. This appears among other things from many murals and other images in Egypt.

The quantities of Saffron harvested are described in detail on more and more clay tablets from a little later time. Many clay tablets have been preserved because they are unintentionally baked during fires and volcanic eruptions.

There was a considerable fleet to trade:

Saffron was so important at that time that people everywhere depicted Saffron: on murals, on pots, bowls and vases, and on clothes. Here are some examples from different periods of the Minoan Civilization: 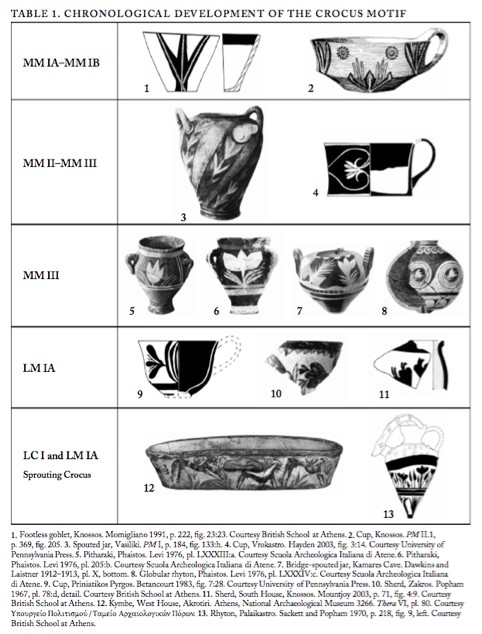 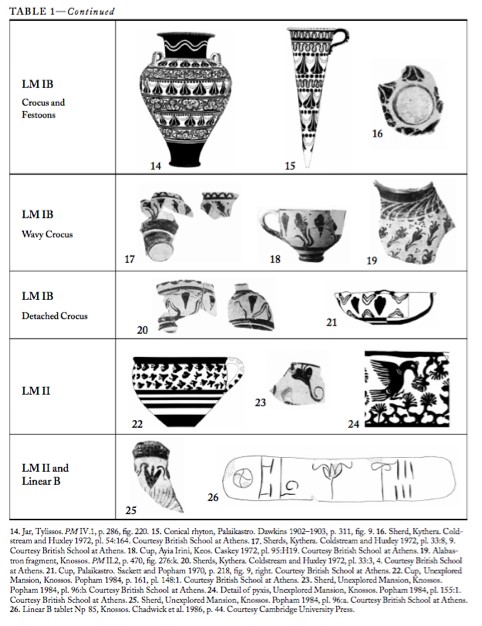 All our transactions are securely processed by Mollie.

Within The Netherlands: free of charge
Within the E.U.: € 6 per order
Outside E.U.: costs upon request *)